What We Did For Our 2013 Summer Vacation: Part One


Hey there world, it’s been a while—over a year. I know that a lot of bad stuff has happened out there since my last post and I’m sorry, I did not realize that this blog was the delicate thread that held the world together. Now I know and I’m going to try my best to get back on the horse and start really blogging about the important issues that you, the world, crave. Such as the regularity of our farts, and whether or not Bryan’s socks look like a well steeped tea bag. Because then and only then will you, the world, be able to relax knowing all that is important is, once again, available with the click of a mouse and feel free to kick your collective feet up and tackle this whole North Korea thing.

But you have to understand, maintaining this blog is not as easy as it used to be for me. You see, now that we are international rock stars with up to 100 people showing up at every show, my duties with the band have changed. In the olden days (back in the early 2010’s) the world was my oyster, days were spent doing nothing but slangin’ a couple tees and enjoying the delicacies of the world’s finest gas stations. There was hours of down time to spend digging through photos and writing incredibly witty captions.

Now I am the Tour Manager of a band that makes almost thousands of dollars a year. All my time is spent fanning John with palm fronds with one hand while feeding David organic, non-soy, gluten-free grapes, (a rider requirement) with the other. Then it’s off to style Aaron’s back hair into a Jennifer Aniston esque quaff (early Friends era) and every night I have to chew all of Bryan’s food and feed him like a momma bird feeds a baby bird! Where is the free time in that day I ask! I have none. That is why the blog has been so hard to maintain.

Well, that and Instagram. It’s hard to get original photos for this thing when everyone can just blap them into space as soon as they take them.

All of that being said, let’s get into this tour.

I should start by introducing the newest member of the Red Fang family, Adam Pike: 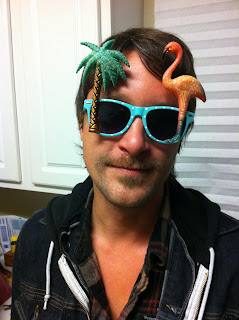 Known by us, as ABP (FOH) Adam is our Front of House or sound guy to the layperson. Due to the fact that Adam is way better looking than the rest of us, all photos of Adam from this point on will look something like this: 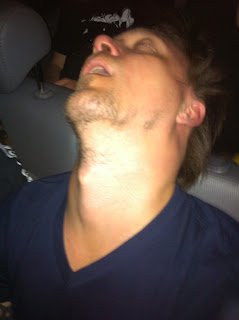 Actually Adam recorded Pre-dog and as been part of the fam for a long time, you might remember a little car accident we got in a few years back? He was with us. He’s one hell of a FOH person and we are happy as hell to have him on the road with us. If you see him at a show buy him a gin and tonic.

Let’s see we played a couple shows in Spain with some band called Iron Maiden. Guess they’re some new hot band or something, never heard of them: 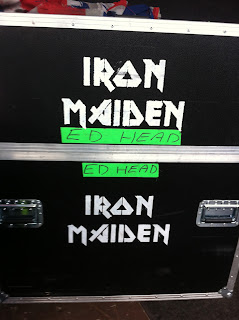 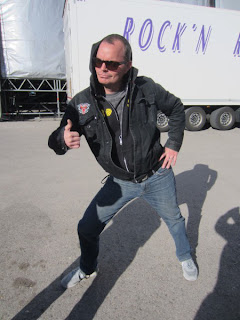 After that we bounced down to Greece where we met up with the Cancer Bats homies for a couple shows: 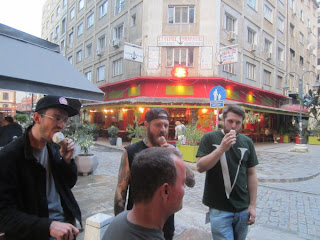 (Isn’t that a flattering photo? John’s big ass head taking up half the frame…)

And had one of the best Meals of our lives: 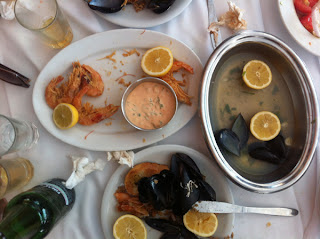 Even the toothpicks had the flavors of the old country: 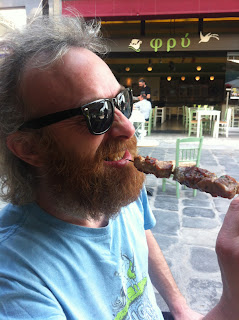 It would appear that John also liked the Mediterranean: 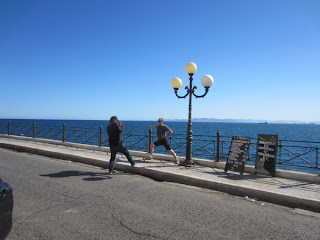 David wasn’t having John’s pussy ass pose and got straight G-Unit on that ocean’s ass! 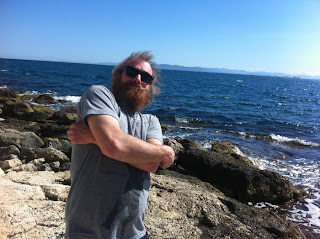 After a couple of great shows in Athens and Thessaloniki we threw the necessities into the bags: 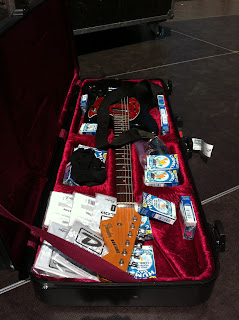 What? There’s a pair of socks in there…

And headed on over to Kiev where our friend Vlad had a incredible spread waiting for us: 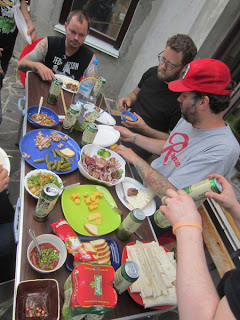 After dinner Bryan and I showed them how to party Red Fang style! 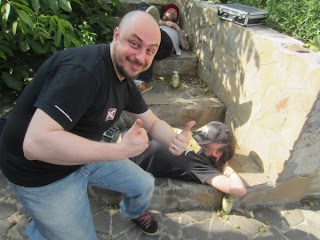 Take that Ukraine! Doubt they will forget that any time soon! Woooo!

One of the things that makes tour so great is getting to see how the rest of the world operates. Take for instance the act of driving. In the U.S. it is a very rigid set of rules and regulations where in places like the Ukraine it seems to be more of a laid back suggestion-based-system. You know, let’s say there are three marked lanes, where in some more uptight places they might stick to only those three lanes. In Kiev they seem to say “Hey Bud, if you can make turn those three into six—well—party on!” “You wanna cram a couple motorcycles in between all those lanes?” Fucking sweet!”

It’s not limited to just the car to lane ratio either. Maybe a full size concrete truck turns over on a highway off ramp, spilling diesel fuel all over the crowded, hot, asphalt. In some stick-up-the-butt societies they would close the ramp down and deal with the problem, There you just drive right through that puddle of highly flammable liquid and honk at the guy holding the fire extinguisher as if to say “Hey Dudder, good luck with all that, now get out of the way” and keep on moving down that dusty road. 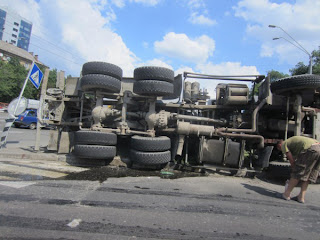 After a great show and an incident that involved Bryan taking a late night dip in a lake that, we were later told, was heavily polluted due to the Chernobyl disaster, we jumped on yet another plane headed to St. Petersburg, Russia.

Like last time we were in Russia after the show we hopped overnight train this time going the opposite direction, from St. Petersburg to Moscow.  Turns out John had a couple too many sips of the local grape and things got a little, little weird: 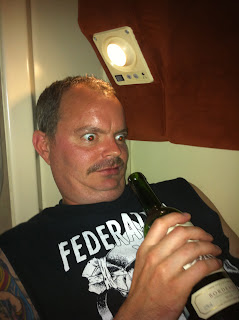 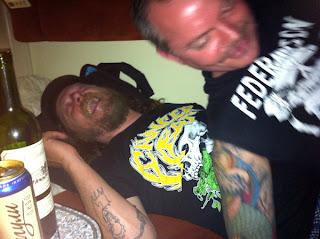 I won’t go into details, but as Aaron soon learned, there are some things you can’t unsee, not matter what you do. 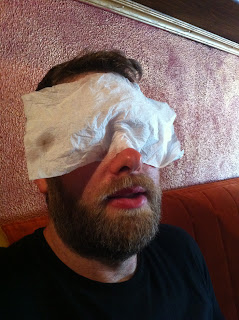 The Moscow show went freaking bananas once again. Thanks a ton to everyone that came out. And if you know this guy below please tell him that he might want to get some sort of chemical scrub or skin graft for the back of his neck/back of the head area. Or at least invest in some heavily, heavily medicated shampoo: 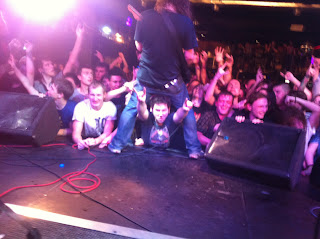 Next up was Krasnodar but not before taking a little trip up the Stairway To Heaven: 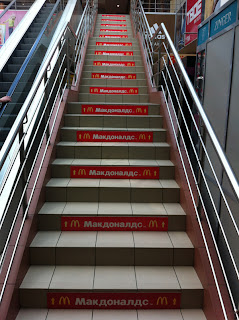 After the show we packed it up and took a refreshing five-hour drive to Rostov-On-Don. Adam came out looking better than ever: 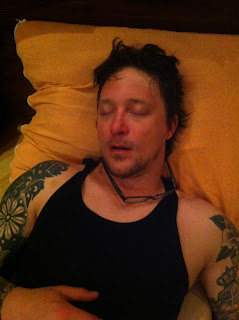 Okay, I’m going to have to steer away for the story here because I have been trying to finish this damn thing for over a week and just never get around to it. SO! Let’s just wrap it up here, I’ll slap this thing up on the inner-webs, and start on part two as soon as I get the chance.

Wait. I’ll make it more dramatic, like a real writer:
Tune in (do people tune in to books?) next time to find out what happens when we get the green light to have a couple drinks with Slayer!: 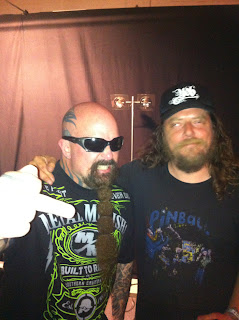 Popular posts from this blog

What We Did For Our Summer 2013 Summer Vacation: Part Duex.

By Red Fang July 12, 2013
Okay, where were we? Slayer. That’s right. So, after all the craziness that was the first couple weeks of the tour we finally settled into our digs for the rest of the tour and met our driver Jens:
Things you should know about Jens:
The man can drive his ass off.
You don’t want to eat his hummus, or he will kill you.
If you’re a promoter that ripped off another band he was working for who happens to be at the show he is at, you best find a ATM because he will shake your ass down for all that loot. (Did that make any sense? I don't care.)

After a quick bro down with him, we made our way to Interlaken where following a night of hanging with some road homies and watching some Rammstein… Wait, I have to say something right now. I, like a lot of people out there, have never given a good goddamn about Rammstein. Never got the allure. But after watching them live—HOLY FUCKING SHIT! I couldn’t tell you what one of their songs sounds like but their stage show is insane. Fire shooting eve…
70 comments
Read more

By Red Fang June 08, 2012
You know the saying better late than never? This post very well might be an exception to that rule for the following reasons:

1)    I lost my camera and all the photos on it. So I have to use whatever is on my phone and John and David’s photos.
2)    Since being home I have had more beer poured on my face than a corpse at an Irish wake and remember little to nothing about the last couple weeks in Europe.
3)    Compared to the road where all there is a van full of dudes that I don’t really want to talk to after a couple weeks, at home there is a couch and cable to distract me.
4)    I took no notes about said last couple weeks because:
5)    I am really lazy


Wiesbaden, Germany 4/27/12 I remember this place! It was an old slaughterhouse turned venue. Those rods on the ceiling are where they would hang the carcasses.  This is going to be easy.


Winterhur, Switzerland 4/28/12 I got nothing.
No! Wait!
This was one of the most scenic drives of the tour as you can tell by these amazing photo…
30 comments
Read more